The Wisdom of Napoleon Hill 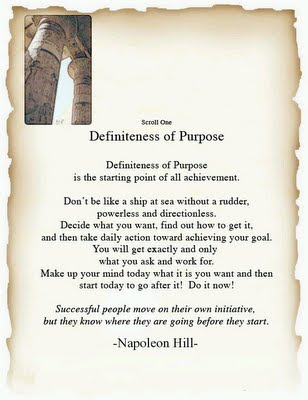 Napoleon Hill was an American author who was one of the earliest producers of the modern genre of personal-success literature. He is widely considered to be one of the great writers on success and his most famous work, Think and Grow Rich, is one of the best-selling books of all time. Hill's works examined the power of personal beliefs, and the role they play in personal success. "What the mind of man can conceive and believe, it can achieve" is one of Hill's hallmark expressions. How achievement actually occurs, and a formula for it that puts success in reach for the average person, were the focal points of Hill's books and teachings.

Hill considered the turning point in his life to have occurred with his assignment, as part of a series of articles about famous and successful men, to interview the industrialist Andrew Carnegie. At the time, Carnegie was one of the most powerful men in the world. Hill discovered that Carnegie believed that the process of success could be outlined in a simple formula that anyone would be able to understand and achieve. Impressed with Hill, Carnegie asked him if he was up to the task of putting together this information, to interview or analyze over 500 successful men and women, many of them millionaires, in order to discover and publish this formula for success.

This video link explains Hills exploration into personal and professional development through his meetings with Andrew Carnegie. Enjoy the wisdom shared by Napoleon Hill!
Email ThisBlogThis!Share to TwitterShare to FacebookShare to Pinterest