The Beauty of the Sistine Chapel 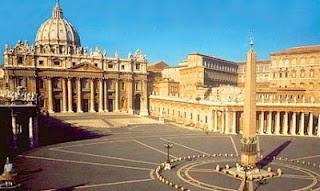 As I watch midnight mass at the Sistine Chapel in Italy on Christmas Eve, I am reminded of my trip to Rome. Seeing the Chapel again on TV and its appeal to all ages and races throughout the world has encouraged me to share some interesting information of its inception and history to date.

The Sistine Chapel is not only one of the world’s most significant sites of holy pilgrimage, but contains unparalleled historic artwork by some of Italy’s most celebrated Renaissance artists, including the unparalleled Michelangelo. A period in history when optimism and belief in classical ideas provided artists of that time with the desire and energy to realize their incredible works. Still relevant today as a venue for important religious ceremonies for The Holy Catholic Church, The Sistine Chapel is more than a historical destination. This site still inspires artistic and spiritual awe amongst its millions of visitors each year, and is in fact the very epicenter of the thriving religious community of The Vatican City.

The Sistine Chapel is part of a 1,000 room network known as the Apostolic Palace, or the Sacred Palace, which is the pope’s sanctioned Vatican residence. In addition to the Sistine Chapel, this massive set of buildings includes the Papal Apartments, the Vatican Library and Museums, various government offices of the Holy Catholic Church, numerous lesser chapels, and Raphael’s Rooms, which are public areas of the papal residence decorated in superb frescos by the legendary renaissance artist Raphael Sanzio.

The Sistine Chapel was designed by Baccio Pontelli for Pope Sixtus IV, and was subsequently constructed by Giovannino de’ Dolci between 1475 and 1483. The finished Sistine Chapel was at first used for regular religious services, the first mass being held on August 9th, 1483, for The Feast of the Assumption. In more recent times, however, the Chapel has been chiefly used to host The Papal Conclaves, the ceremonies and proceedings that take place to select a new Pope.

Much like the interior decorative artwork, the architectural plans of The Sistine Chapel stemmed from biblical inspiration. The measurements of this simple rectangular brick building with its six arched windows correspond exactly with the Temple of Solomon in The Old Testament: 40.93 meters long by 13.41 meters wide by 20.70 meters high. The building is roofed by a flattened barrel vault ceiling. In the interior, the marble transenna, or screen, is divided into two parts: the larger part that includes the altar is used by the priests and clergy for religious ceremonies, and the smaller part is the area that hosts the faithful churchgoers. During significant religious ceremonies, the side walls are covered in lush tapestries designed by Raphael that represent events in the lives of St. Peter and St. Paul.

The Frescoes by Ghirlandaio, Botticelli, Perugino, and Cosimo Roselli 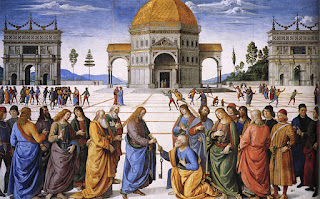 The walls of the chapel were commissioned to be decorated by some of Italy’s premier artists; including Botticelli, Pinturicchio, Ghirlandaio and Luca Signorelli. Based on the division of world history into three distinct eras, the first division of the walls of the Sistine Chapel were decorated to represent earth in the time prior to The Ten Commandments, the second partition represented the world between the times of Moses and Christ, and the last segment was dedicated to an artistic representation of the modern Christian era.


The Ceiling by Michelangelo

In 1508, Pope Julius II requested that Michelangelo transform the ceiling of the chapel, at the time a plain blue sky decorated with golden stars, into a piece of art featuring the twelve apostles that would correspond with the richly decorated walls of the church. Although he considered himself foremost a sculptor and was from the beginning opposed to the Pope’s commission, Michelangelo not only obeyed the Pope’s wishes but subsequently surpassed them by transforming the ceiling into an awe-inspiring canvas that featured more than three hundred biblical figures. Michelangelo undertook this challenge and painted the frescoes practically unaided on 12,000 square feet of ceiling between the years of 1508 and 1512. The three hundred biblical figures were dispersed between nine frescoed images including God’s Creation of the World, God’s Relationship with Man and Man’s Fall from Grace. This unrivaled artistic achievement is still regarded as one of the foremost examples of pictorial art.

The Last Judgment by Michelangelo As if his artistic accomplishments on the Sistine Chapel Ceiling weren’t enough, Pope Paul III commissioned Michelangelo some twenty years later to create a mural of the Last Judgment on the altar wall of The Sistine Chapel. This latest artistic work, completed in 1541, differed greatly in style from Michelangelo’s early works, perhaps influenced by the political and religious climate of the times. His earlier work on The Chapel ceiling evoked a feeling of human triumph and aesthetic pleasure, while this newer mural attracted adversity and some criticism because of the menacing, godly wrath depicted in the mural images, as well as the unexpected prevalence of human nudity in his paintings. Despite the controversy surrounding Michelangelo’s latest creation, it is still considered to be one of the world’s greatest religious paintings.


Some interesting facts about the Sistine Chapel.

Michelangelo was only 32 years old when he began painting the ceiling of the Sistine Chapel and completed it in only 4 years?


The Sistine Chapel was built to house the Cardinals while they deliberated on who should become the next Pope.

The famous chimney that releases black smoke telling us the Pope has died and white smoke telling us we have a new Pope is set up in the Sistine Chapel? You can see the marks where it sits towards the back right of the chapel?


No artist in history suffered as much as Michelangelo in the 4 years it took him to complete the ceiling of the Sistine Chapel. He suffered with painful knees, back, neck and almost went totally blind but he still managed to live to be 89 years old.


Michelangelo painted the Last Judgement (the front wall of the Sistine Chapel) 28 years after he finished the Sistine ceiling?


Michelangelo’s enemy, Raphael, was originally asked to paint the Ceiling of the Sistine Chapel but refused. He suggested Michelangelo knowing he was a sculpture and not a painter.


The Sistine Chapel was completely cleaned between the years 1980 to 199. It was paid for by the camera company Fuji Film. Fuji Film now own all copyright to the paintings on the ceilings for 20 years, and that is why there is no photography allowed of that artwork..

Pope Julius ll (the Pope that commissioned Michelangelo to paint the ceiling of the Sistine Chapel)sold Indulgences in order to pay Michelangelo for his work? Selling Indulgences meant that people could pay money to get time off Purgatory.


There are 3 Botticelli paintings in the Sistine Chapel, painted 24 years before Michelangelo began the Ceiling.