Stop Bullying In The Workplace 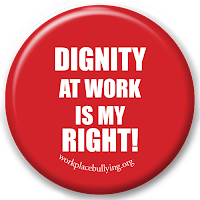 Bullying isn't confined to childhood, it also happens in the workplace. The bully might have left the playground and moved to the cubicle next door.  Many of the behaviors resemble school-yard battles of old, but the stakes are much higher such as your health, well-being and employment status. There is no playground monitor to intervene.

However, employees, companies, researchers and even legislative bodies are becoming aware that this part of the culture of work that needs to change. There is increasing evidence to support that it's bad for your emotional and physical health, that certain factors breed it and that it CAN be deterred. But in order to stop the behavior, we first need to define it.

There are many different names for a relatively wide range of behaviors like incivility, verbal abuse, psychological aggression, mobbing to name a few.

Incivility is “low intensity, deviant behavior. It violates the norms of respect however; some bullying includes intent to harm, whereas incivility consists of merely discourteous behavior. Bullying has been defined as; repeated, health-harming mistreatment of an employee by one or more persons, manifested in one or more ways: verbal abuse, threatening and intimidating conduct (verbal or nonverbal, nonphysical) that interferes with work and undermines legitimate business interests.

Bullying is as much about what people don't do, such as excluding people from meetings, withholding information or leaving them off an important e-mail, as what they do, such as yelling, name-calling, making threatening statements, micromanaging or undermining somebody's reputation. Intent isn't necessary because sometimes bullies don't realize they are bullies, but the behavior is still harmful.  Even if the victims don't recognize that they are being bullied, their mental health is still affected.  A defining feature of bullying is negative behavior that people feel unable to defend against or control.
Some of the key components of bullying include behaviors that are: Verbal and nonverbal (excluding physical contact), repetitive or patterned, unwelcome and unsolicited, violate appropriate conduct toward others, harmful or cause psychological or physical injury, intended to harm. A real concern is that because bullying is so common, many people don't realize its harmful effects. Yelling and verbal abuse may be written off as tough-if unpleasant-management. Micromanaging may appear to others as an employee failing to meet expectations. And ostracism may seem like personality conflict.

Targets of bullying may even start to believe they are somehow at fault. Bystanders often dismiss the behavior or don't want-or dare-to get involved. In workplaces that allow bullying behavior to go on, management is unlikely to intervene. In many cases, employees are told to work it out for themselves which never really puts the issue to rest.

Targets often may be encouraged to think that the bullying is all "in your head," but the stakes are very real. Even when the effects are not that extreme, bullying is harmful to the health and well-being of victims, organizations and society, likening it to sexual or racial harassment. Unlike these forms of harassment, however, general bullying is not prohibited by law in many places.

Legal loopholes have allowed this to continue throughout the world. The province of Quebec in Canada and some countries such as France, Sweden and Norway have anti-psychological harassment laws, but there are none in the United States. Even members of classes protected by Title VII of the Civil Rights Act or by the Americans with Disabilities Act do not usually have legal recourse against general bullying. Unless the bullying is directly tied to a person's protected status, such as gender or race, it's not considered discrimination and tying bullying to sexual or racial discrimination can be very difficult.

There have been some small strides towards legislation being passed in various U.S. states called the “Healthy Workplace Bill.” It seeks to give severely bullied employees who have suffered concrete psychological, physical or economic effects the right to sue the bully or the company. Since a company would only be liable if it failed to stop the bullying, this would give employers a legal incentive to respond to employee abuse.

The bill would give severely bullied employees a legal claim without opening the floodgates to frivolous lawsuits. Although the bill is being considered in nine states-New York, Kansas, Missouri, Massachusetts, Hawaii, Washington, Oregon, Oklahoma and California. It may be years before a law is passed in any U.S. jurisdiction.

We're where we were with sexual harassment law 30 years ago. The term was just beginning to be used, but people didn't think in terms of legal protections until they understood how harmful it could be. The key is to see bullying as a kind of human rights issue. It's about dignity at work. We need to say that we're going to treat everyone decently. Period!

Get the support you need and work with a Business and Life Management Coach with over 20 years’ experience empowering individuals, executives and business owners to attain self-defined success in their professional & personal lives. Book a complimentary session at http://www.denisedema.com
Email ThisBlogThis!Share to TwitterShare to FacebookShare to Pinterest