Eliminate the Fear of Being Judged! 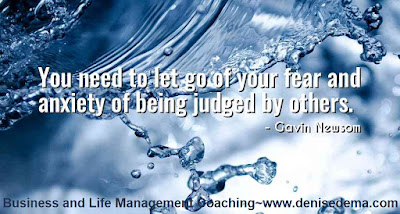 All of us go through events in our social life where we fear being negatively judged by others. Perhaps you have made your own judgments throughout your life about certain people and what you think of them.

Making judgments about others is something the human brain likes to do. From an evolutionary standpoint, we had to judge others as “friends” or “foes” to protect ourselves from people who might be a threat to our tribe or community.

Those who were disliked or viewed as a threat were eventually ostracized, punished, or killed. So most of us have a hard-wired response to try and be liked and accepted by others, which explains many fears and anxieties associated with our social interactions.

Despite this tendency, we can find ways to get over the judgments people will make about us on a daily basis. We learn to become less sensitive to them and not let them so easily get under our skin or make us upset. This article will cover these different aspects of how to let go of people always judging us.

We often think of “judging” as a negative thing, but when someone tells you they like you, or that you’re smart, or a cool person, that’s a type of judging too – it just happens to be a very positive one.
Throughout your life you’re going to meet many different people, and some of those people you’re going to “click” with better than others. You can’t expect to win over everyone, so be willing to accept that some people won’t like you, and some people will.

Anyone who puts themselves out there and let’s their true personality shine through is going to have their fair share of critics. Once you begin to expect it, it doesn’t become as shocking or bothersome when someone says something insulting or cruel.

Become less judging of others
Usually people who fear judgments the most are the ones that are very judgmental themselves.

Try to be kinder and more understanding toward others, and you won’t have such a hostile and cynical view of the world. You can find the good in anyone if you’re willing to see it – and once you cultivate this attitude, you’ll be more likely to expect others to reciprocate this attitude toward you.

Remember, everyone is capable of making bad decisions in the wrong situation, and even you yourself aren’t always perfect. This will allow you to be gentler in your judgments toward both yourself and others.

If you did something wrong the first time you met someone (insulted, mocked, or offended them), then it may be appropriate to apologize before you can move on. However, most of the time we can move past these first impressions simply by making better second, third, and fourth impressions.

The more time someone spends with you the more they get to know the real you. No one can tell everything about you when they first meet you, it takes multiple interactions to really learn about someone.

As people get to know you more, their first impression of you will become less important. I have friends today who I didn’t always get off with on the right foot, but now we look back on those experiences and just laugh. You just have to be willing to take a longer view in your relationships.

Avoid people who are too negative (if you can)
We all have our limits and some people can be unbearably negative and tiresome to be around.

If you have a choice, sometimes the only thing you can do is to avoid the person more. If you know they’re going to be at a party, then don’t go there. If you work with them, try to limit interactions to just work-related talk. And if it’s a negative friend, you may want to consider finding new people to hang out with.

It’s not the most pleasant solution, but it may be necessary if you can’t find anyway to tolerate a person’s negative and overly judgmental attitude.

Achieve Your Full Potential! Book a complimentary session at http://www.denisedema.com to get the support you need to excel in your professional and personal life.
Email ThisBlogThis!Share to TwitterShare to FacebookShare to Pinterest