How To Control Your Anger 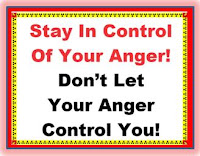 One in three people say that they have a close friend or family member who has anger problems. The Mental Health Foundation, suggests that many of us will encounter work situations where emotions run high, and can spill over into anger.

Not all feelings of anger are negative, for example, if you get animated on behalf of a colleague who's been given an unnecessarily hard time by others in the workplace, your response m strike a chord and result in a positive outcome. But angry outbursts that intimidate or undermine co-workers are always unacceptable.

In this article, we look at what anger is and why some people get angry, while others don't.

The Merriam-Webster dictionary defines anger as "a strong feeling of displeasure and usually of antagonism." Psychologist T.W. Smith agrees, saying it is "an unpleasant emotion ranging in intensity from irritation or annoyance to fury or rage." But what makes people angry is different for everyone. Things that spark ire in some people don't bother others at all. Yet we all regularly experience events that could make us angry. They include:

Anger and aggression are not the same thing. Anger is an emotion, while aggression is a behavior. Not everyone who feels angry is aggressive, and vice versa. Sometimes people are aggressive because they feel afraid or threatened. Not everyone who's angry yells or seeks confrontation. Some people let their anger out by ignoring people or by sulking, or through sarcasm. People who behave this way are called passive-aggressive, and they can be as difficult to deal with as those who scream and shout. Other people react entirely passively to anger. They show no outward signs of anger, no matter how furious they are. But these people may be doing themselves more damage by suppressing their emotions than those who show their anger.


The Dangers of Anger

An appropriate level of anger can spur us to take proper actions, solve problems,  and handle situations constructively.  However, uncontrolled anger can have many negative consequences, especially in the workplace. It can cloud our ability to make good decisions and find creative solutions to problems. It can affect relationships with co-workers. And it can destroy trust between team members.

Effective team working is based on sharing ideas in a supportive environment. If people think the team leader is going to fly into a rage as soon as they suggest something, they'll stop contributing, and the team will stop functioning at its best.

Unexpressed anger can be as harmful as outward rage. The angry person who doesn't express his or her anger may bear grudges or see himself as a victim.  His colleagues may not realize that there's a problem, so they may be less likely to be able to help him.

Frequent anger, whether expressed or not, poses health risks, too. One study found that people who get angry regularly are more likely to suffer from heart disease. Research has also highlighted a link between anger and premature death. Further studies have discovered that anger correlates to anxiety and depression. Seeking the advice of qualified health professionals if you have concerns over persistent anger is important to get the support you need.

It's important to deal with anger in a healthy manner, so that it doesn't harm you or anyone else. First, recognize that the problem exists. Sometimes people don't understand that their anger is an issue, either for themselves or for others. They may blame other things: people, processes, institutions, even inanimate objects like computers. You probably know people like this, or maybe you recognize it in yourself. You can tackle this by developing self-awareness which can help you to understand how others see you, and in turn enable you to manage your emotions better.

Also, it's important to be resilient. Being able to bounce back from disappointment and frustration is much healthier than becoming angry about it. It's also good to learn to take control of your own situation, and to avoid believing that you're powerless. Get used to speaking up for yourself and telling people when you think that they're wrong.

Here are some more practical steps that you can take to prevent or manage anger:

Learn to recognize the onset of anger. When you become angry, your heart rate rises and you breathe faster. It's the classic fight-or-flight response. Be vigilant, so that you can begin to deal with the source of your anger before it builds up.
Give yourself a time-out. Try to stop yourself "leaping in" with an angry response to a situation. Count to 10 before you act.
Breathe slowly. Regulating your breathing
helps to combat the onset of anger, calms you down, and allows you to think clearly.
Take the longer view. If your anger is recurrent, you may need to take a more strategic approach to dealing with it.

Dealing With Someone Else's Anger

It's important to demonstrate emotional intelligence when dealing with angry people. This helps you to keep your own feelings in check, while respecting the fact that others may be struggling with theirs.

Try the following six approaches for dealing with someone's anger:
1. Remain calm. Stay cool and let the other person express her feelings. Show that you really are listening and reassure her that you want to understand what the problem is. Never meet anger with anger. But don't allow yourself to be manipulated or browbeaten.
2. Remember that you're talking to a person. Everybody behaves differently, and you need to treat an angry team member as an individual. If you are his manager you are due some respect, but so is he. Empathize and try to understand his point of view.
3. Don't just quote the rule book. Quoting company policy at someone when she's in a rage won't be effective, and it can make a bad situation worse. It's OK to be assertive and seek a solution once you've calmed things down, but using the rule book is not the way.
4. Be positive. Show that you want to resolve the negative situation to everyone's benefit. This doesn't mean that you need to give in, just that you show you're taking his concerns seriously and seeking resolution.
5. Keep it private. Don't allow "a scene" to develop. Find a meeting room or private space. This will allow you to have a proper discussion, and demonstrates discretion and tact.  Alternatively, suggest a walking meeting to help to calm things down.
6. Be aware of unexpressed anger. It won't always be obvious that someone is angry. Look out for signs such as someone avoiding particular subjects or actions, going quiet in meetings, or avoiding eye contact. You may need to draw out the problem with careful use of questioning techniques instead.

Anger is an emotion we all feel, and one that many people find hard to deal with. It can manifest itself in aggressive, confrontational behavior, or in more passive but no less damaging ways. Start to manage your anger by recognizing it. Then, take steps to address it by tackling the source of your anger. Use relaxation techniques to deal with outbursts. In the longer term, try to develop self-awareness, emotional intelligence and resilience to cope better with angry feelings. When you're dealing with the anger of co-workers, show empathy, and try to understand the root of their problem. Don't back down, however, and assert yourself calmly if you feel that someone else is using anger to try to impose their will on you.

Achieve your full potential and book a complimentary session today at Business and Life Management Coaching
Email ThisBlogThis!Share to TwitterShare to FacebookShare to Pinterest